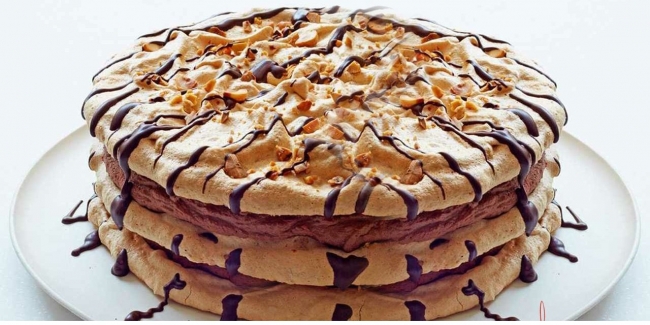 1. Preheat the oven to 140°C . Put on baking trays the baking sheets with parchment or baking paper.
2. Whip the egg whites in a large clean bowl until stiff peaks.Add the sugar a spoonful at a time, until the mixture becomes glossy and does not retain its shape. Grind the hazelnuts.
3. Put a drop of the mixture of meringue under each corner of the paper . Now with a spoon, put equal amount of mixture in the middle of each sheet is about 18 cm wide.
4. Bake in the oven for 1.5 hours (should be covered by a crisp outside and be slightly soft in the middle). Turn off the oven and let the meringue cool inside, the door slightly. In the fridge you can store them in an airtight container for weeks.
5. When ready to serve, make the stuffing. Place the chocolate in a heatproof bowl on a saucepan of boiling water (it should not touch water) and heat until then, until the chocolate is melted. Set aside to cool for 5 minutes.
6. In a separate bowl, whip the cream until a soft peaks. Mix three-quarters of the melted chocolate with the cream and stir.
7. Make a meringue stack, promazyvaya each layer with half of the cream. Pour the remaining chocolate.

Cupcakes with protein-butter cream: a step by step recipe with photos

Cupcakes with protein-butter cream: a step by step recipe with photos

Black bread with malt and caraway seeds in the bread maker