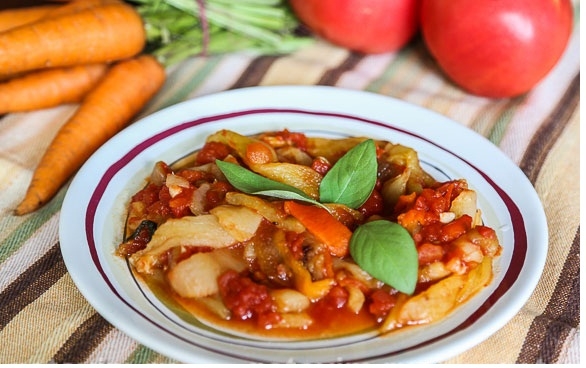 Aromatic ripe sweet peppers wash under running water, wipe dry with a towel and grease with vegetable oil. Preheat the oven to 190-200C. If you have a grill, you turn on the mode with the grill. Arrange the peppers on the grill or baking sheet and leave in the oven for 15-25 minutes, until the surface of the peppers do not appear burns. From time to time peppers need to flip from one barrel to another, so they don’t burn.

To put the peppers in a bowl, tighten the film and leave for 10-15 minutes. When peppers are slightly cool, remove the skins.

Every pepper cut in half, remove the seeds and stalk, cut along the stripes.

Tomatoes wash, cut crosswise bottom and pour boiling water. Leave for 10 minutes. After 10 minutes the skins from the tomatoes easily removed and the flesh should be chopped in the blender. In a deep saucepan heat the oil, add the chopped garlic and allow to warm up for a few minutes. Add the chopped tomatoes and simmer on low heat, stirring a couple of minutes to the tomato puree has thickened considerably. Season to taste with salt, sugar, ground black pepper and add the Basil leaves.

Shift in the tomato puree strips of roasted peppers along with the juice which has formed at cleaning. Stir, heat on low heat, remove from heat and let stand, covered. Roasted peppers in tomato sauce is served as a separate dish or as a garnish to meat or fish.