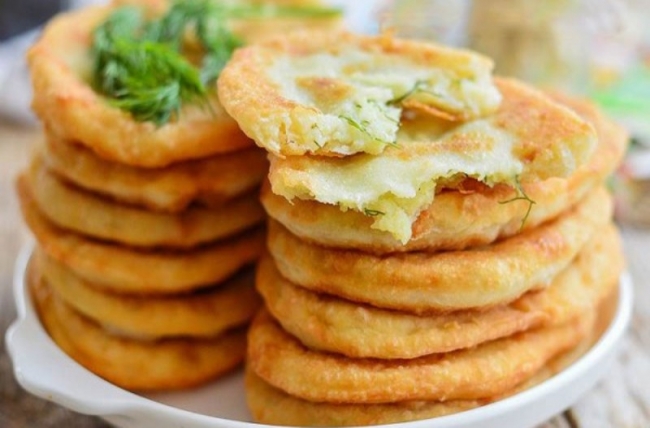 For the filing of such thin fried potato patties with yogurt stock up on sour cream. It will replace the sauce with the fried pies will be even tastier.

250 ml of yogurt mix with one egg, a teaspoon of salt and teaspoon of baking powder. Teaspoons without slides. Also add in yogurt two tablespoons of sunflower oil.

All we need to add 350 g of flour, but add it we’ll parts. First, the input half of the flour, mix all with a spoon or fork.

Then enter another part of flour and about 50 g flour leave unused. We will need it later.

Knead the dough with hands, greased with sunflower oil. It will be very soft and tender. Perhaps the dough will slightly stick to hands and surface, but it’s not terrible.

The dough on kefir for fried pies is ready. Will cover it with clingfilm, which will protect the dough from chapping, and move on to preparing the filling for pies with potatoes.

Take 350 g of mashed potatoes. That’s how many potatoes you need for fried pies from the dough quantity.

Back to the test. Carefully sprinkle work surface with flour (here we need the remaining 50 g of flour) and roll out about half the dough (easier to work not with the entire test at once, and with parts).

The thickness of the rolled layer shall be 5 mm. using cut out circles from rolled dough circles.

In the center of the circle put the filling.

The remaining circles cover circles with the filling and tightly zasiyaet edges of pies. So we did some circles with filling, yet little resembling cakes.

Now, these vague circles with the filling of the formed patties. This is done literally by one movement of a rolling pin.

Lightly pressing down the Patty go through it with a rolling pin from the bottom up, one time is enough. It turns out a neat pie oblong.

And don’t forget that we still have a dough. Adding to it scraps from the first rolling and continue the process.

Turns exactly 13 pies. All neat and the same.

Heat in a pan with sunflower oil, about 50 ml, and fry patties in batches of 3-4 pieces until Golden brown on both sides.

Approximate roasting time is 2.5-3 minutes on each side.

Ready thin patties with potatoes and dill yogurt served to the table hot with sour cream or any sauces.